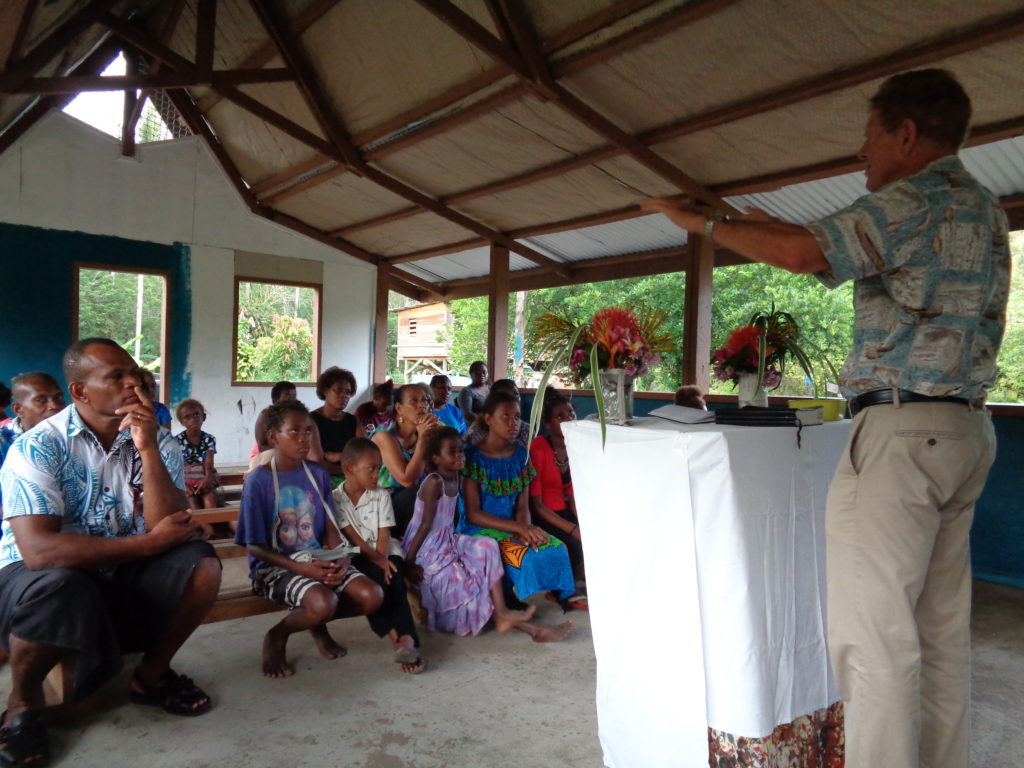 As we watched the sun setting behind the Fijian mountains from our hotel, our hearts were so full of thanksgiving and praise for the open doors of ministry, and the mighty move of the Holy Spirit in every place we spoke His Word.

Micronesian Life Ministries received an ABUNDANT HARVEST with just over 100 people receiving Jesus as Saviour (82 in one service), 200 more rededicated their lives, and many more were healed, delivered, and baptized with the Holy Spirit.

In the SOLOMON ISLANDS, we ministered in different villages every night.  People came in trucks, and others walked many miles from other villages.  Every meeting was different and so special as the Word of God went forth with mighty power, and the Holy Spirit confirmed His Word with signs and wonders.  Pastor Selia and his church leaders coordinated these meetings, and they brought a portable generator, lighting, sound system, and chairs to different villages every night during the week we were there.

A new work began with an open-air meeting in a heavily populated village that had not heard the word of faith before.  The praise and worship music and the lights attracted over 100 people, and just before the message it began to rain very hard.  Everybody ran for cover, but they did not leave.  Jan spoke that night, and as soon as the rain subsided, she shared exactly what the Holy Spirit had given her.  As the people responded to the Word, 82 people gave their lives to Jesus; then as they prayed for everyone, many were delivered from satanic addictions.

We had several meetings with Pastor Turu in FIJI and on Sunday, we were driven to a remote mountain

church.  On the way there, we got stuck twice and walked up the hill; as the road required a 4-wheel drive, which we did not have.   After the service, they treated us to a local Fijian-style sit-down dinner.  They adopted us into their families, and we became one of them.

A thirty-day ministry crusade, flying from island to island throughout Micronesia, brought about much joy, dancing and singing, as God confirmed the Word 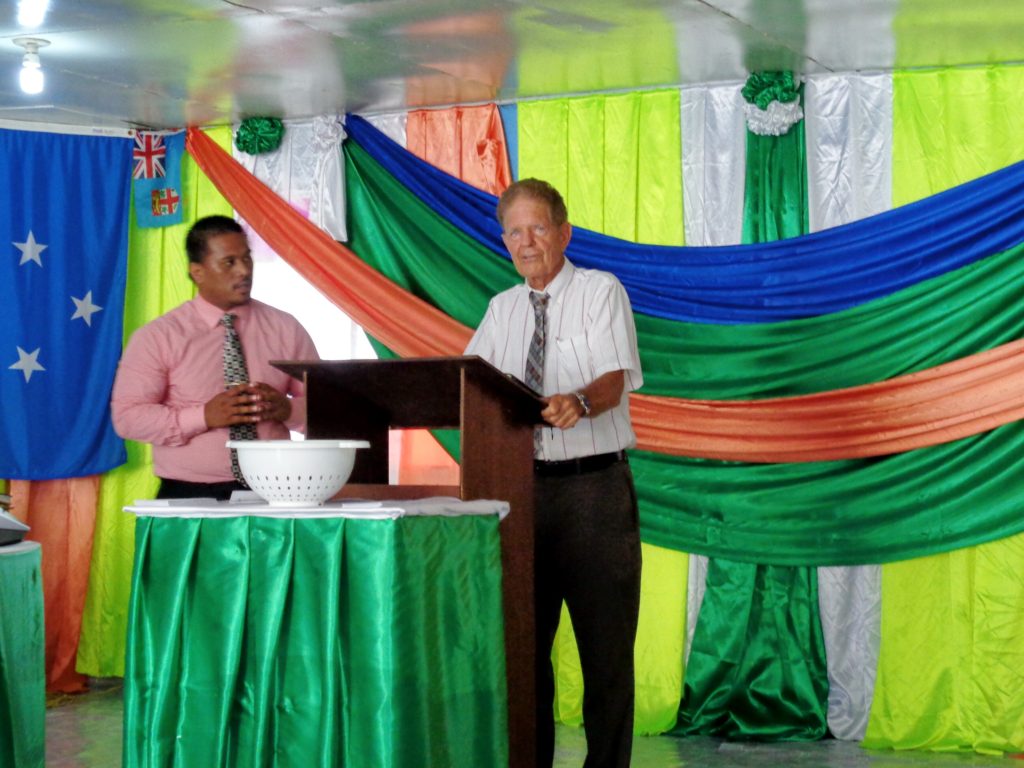 preached, and people received Jesus as Savior, were baptized with the Holy Spirt, delivered from oppression, and healed of all kinds of sicknesses.    Believers from every Island nation are rising up strong in the Word, and doing the extraordinary.

Seven hours after leaving Honolulu on United Airlines we landed on Kwajalein, the Marshall Islands.    The next afternoon taking a 20-minute boat ride to the island of Ebeye, we began our first of five services with Pastor Hone Patrick in the New Beginning Church.  In every meeting we witnessed Holy Ghost breakthroughs, filling the people with praise, laughter and dancing before the Lord.

It has been 10 years since we ministered on Pohnpei, but after receiving an invitation to return, we felt impressed to, and we were so glad we did.  Pastor Herman Soda said again and again, we are harvesting the Word seed you’ve sown into us all those years.  We loved sharing the Word again, encouraging the believers, as we taught 6 sessions in the Bible School, and had meetings in a prison, and in the church at night.   Our hotel was a small home with grass roof – typical island style, clean, with air-conditioning and a back lanai for Herb.

Communication to the next island of Chuuk was very difficult, so we were happy to greet the people at the airport waiting for us.   The Lord opened a great door again, as the Christian Missions Fellowship Church, combined with the Assembly of God people, where more healings and salvations confirmed the Word preached.   Pastor Ben Suda, a young local man, received revelation of seed time and harvest from watching over and over again the Southwest Believers Convention on DVDs we gave him last year.  After a powerful anointed service, he got the people excited about giving a breakthrough offering over the poverty spirit holding back THE BLESSING on those islands.  Just as the widow fed Elisha of her last meal, and received enough to take care of her, her son and Elisha until the drought was over;  we received the offering and BLESSED it with much thanksgiving to God. 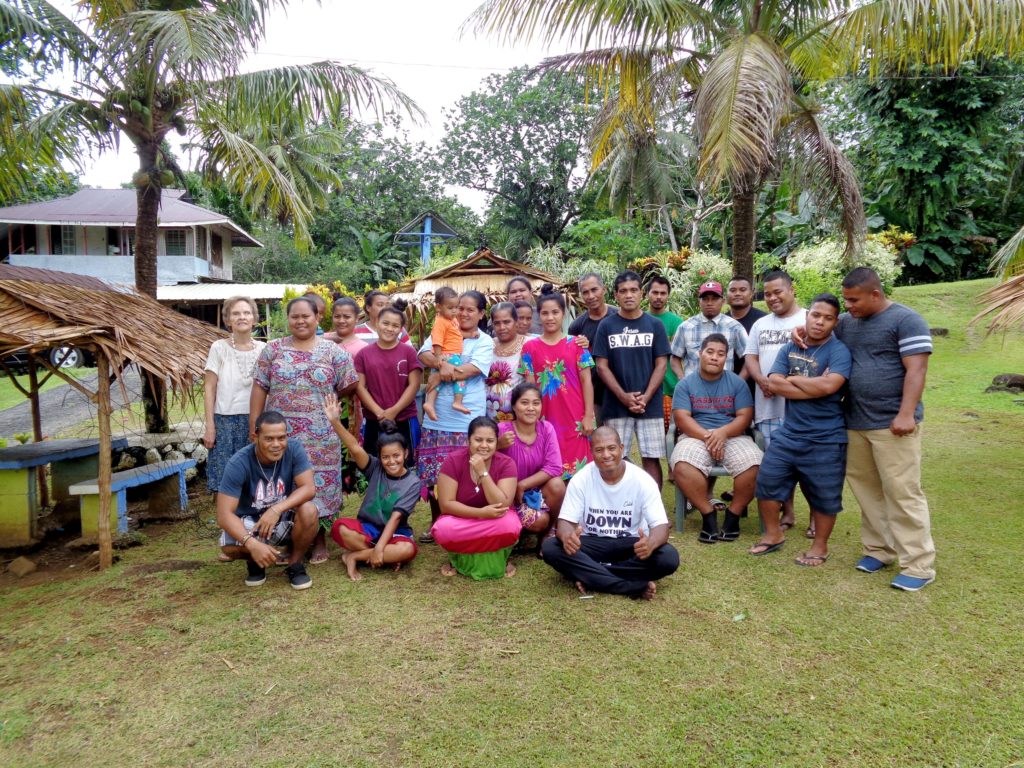 An email from Chuuk said – We were fully blessed by you in so many ways and I praise God for sending you.  I am very grateful for both of you especially for not giving up on us.  I thank God and pray every day for God’s blessing and for your strength to be able to come and minister to us next year.  We love you.  Grace and church family from Chuuk Assembly of God

After Chuuk, we landed on Guam, where we rested for one day, flying out the next day to Palau.  People from many denominations came together for five services meeting in a conference room, and as the Word was preached, a unity of faith rose up in them, allowing the anointing to manifest.  One evening, a lady was set free from an evil spirit, started laughing, and she and others fell under the power of God without anyone laying hands on them.  Another lady who came in a wheelchair with mask over her face, received healing from lung cancer, walked down the steps and went home without her mask.  Two ladies testified of being healed of diabetes, and many others received healings that night.

A letter from Pastor Ruth Snyder said:  The enclosed seed is for a harvest of souls resulting from the 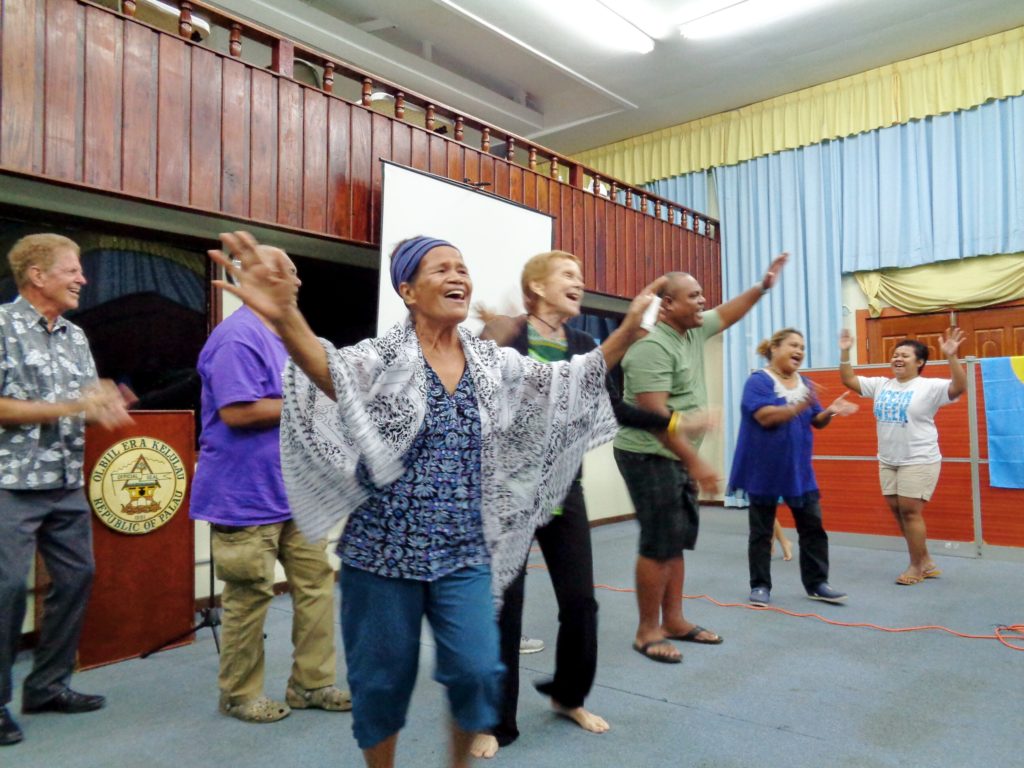 seeds you planted while here in Sept.  The Word changed the environment!  We took the Word you spoke.  We see it!  The growth in righteousness and faith – DOMINION.  Repairing, Restoring, and Taking the nation for HIM.  Thank you again for your surrendered lives to Him and for mentoring us.  JESUS IS LORD!

Leaving Palau at 1:00 a.m. in the morning, we flew back to Guam where we ministered for 7 days with Pastor Riten Peter and his Marshallese Church.  Another great breakthrough happened, as people of different denominations attended the meetings from the islands of Kosrae, Chuuk, Yap, and Saipan.   Some of them received the baptism of the Holy Spirit.  Each Island Nation speaks a different language, so for them to come together as one body is a sign that The Church is getting in place to receive the great harvest of souls before Jesus returns.

So many people, after hearing the goodness of God, were set free from lies of the devil, knowing that God has a wonderful purpose for their lives.    Young people came to the altars broken, saying “I’m sorry God, I’m sorry”, and left those meetings full of the Holy Spirit, and with real peace.

It is hard to express the joy after a crusade like that, and not possible to put into words or photos all the great things we witnessed – TO GOD BE THE GLORY!!